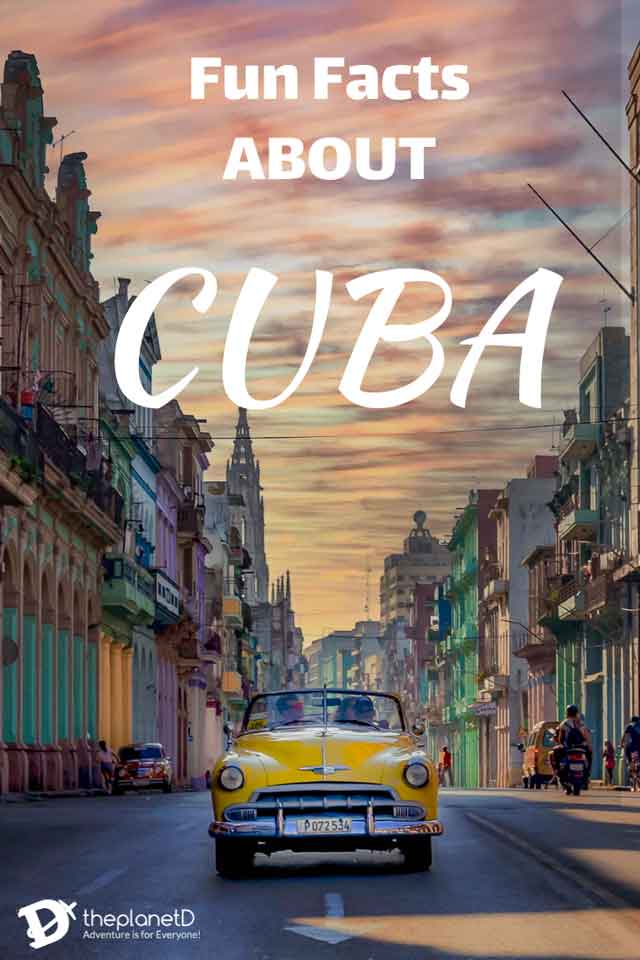 In 2014, President Obama began to thaw American relations with Cuba, a beautiful island nation that, for decades, had been the subject of a travel ban for US tourists. While there were ways around it, usually involving flying to Cuba from Mexico or Canada, it was far harder than it is today!

Yet to many Americans, Cuba is still something of an unknown. Most don’t know much about its history, culture, or people. In this collection of facts about Cuba, we’re going to break down some of the most common myths about Cuba and show you what the country is really like.

If you’re hoping to travel to Cuba, this collection of Cuba facts and our travel guide are indispensable. It’ll help you plan a better, more engaging trip to this beautiful country, making it a truly once-in-a-lifetime trip.

Are you ready to learn more about this incredible island nation? Then read on!

1. Cuba Is Bigger Than You Think

When we think of Caribbean islands, we often think of archipelagos like the Lesser Antilles, home to small islands like Barbados, Grenada or St. Kitts and Nevis. Cuba is far bigger than these islands: it’s the largest island in the Caribbean by quite some margin, and, in terms of land area, is around the same size as Pennsylvania. It’s a long island, too. It could stretch from South Carolina to Arkansas!

There’s more to Cuba than the main island, too. There are four smaller groups of islands that surround the larger island, to its south and north. In fact, Cuba actually consists of more than 4000 islands and cays.

One of the most interesting facts about Cuba is that it has a very diverse culture, made up of many different peoples who have made the island their home.

Prior to the Spanish conquest in the early 1500s, a native people called the Taino lived in Cuba, and while today they are few in number, some of these people still call Cuba home today. The Spaniards brought their culture and religion to Cuba, which was joined by other European peoples, African peoples, Jewish people, and many other ethnic and cultural groups.

Today, the Cuban national culture takes influences from all of these groups, which have come together to produce a vibrant, lively, and welcoming culture.

While some places may have one or two UNESCO World Heritage sites, Cuba has a massive nine of them! In the west of the country, you’ll find Viñales Valley, an incredible valley that is home to tobacco farms that still use traditional farming methods to create perhaps the best tobbaco in the world.

In the capital of Havana, you’ll find the World Heritage site of Old Havana, which dates back to the 1500s. Go to Santiago de Cuba and you’ll find another site that’ll be heaven for history lovers, the San Pedro de la Roca castle, a fortress dating back to 1648, which once protected the coast from pirate raids.

4. Cigars Are a Way of Life

Cuban cigars are famous the world over, and they’re not only made for export, either. Cigars are incredibly popular across all social classes in Cuba, unlike in many other countries where they are seen as the exclusive domain of the rich.

Yet what is it that makes Cuban cigars so popular? Cuban cigars are made from a great mix of tobacco leaves that have been cured twice, creating a smooth and flavorful smoke.

How they’re made also has a massive part to play in their worldwide popularity, too. Becoming a cigar roller in Cuba involves months of education, and they’re still hand-rolled, which leads to an incredibly high-quality cigar: not too tight, not too loose, but just right.

Ah, think of things that are quintessentially American: apple pie, the Statue of Liberty, baseball. Well, baseball is far from exclusive to the US! It is an incredibly popular sport in Cuba, too!

Baseball started being played in Cuba in the 1860s, and today it’s got a thriving league. Over the years, a whole host of MLB players have come to play in the US from Cuba too, including players like Rodrigo Alvarez, who defected in 1963.

Other popular sports in Cuba include soccer, volleyball, and boxing. However, despite soccer’s massive popularity in other Latin American nations, it lags far behind baseball in Cuba.

One of the most fun facts about Cuba is that its one of the very few places on Earth where you can find classic American cars on the roads in great numbers. These date back to before the communist revolution and the resulting American embargo, which saw car exports to the isand restricted.

As a result, Cubans had to make do with what they had, relying on ingenuity to fix these old cars and keep them going through breakdowns and adverse conditions.

As a result, you’d be forgiven for thinking that you’d stepped through a time warp when you look at Cuba’s roads. You’ll see old Fords, Chevrolets, and more, as these amazing photos show. While you will find many modern cars on the road these days, these old Yanqui tanks are still incredibly popular.

If you’re a birdlover, then you’re in for a treat. Cuba is home to the world’s smallest bird, the bee hummingbird. This beautiful little creature weighs less than a tenth of an ounce, and is just two and a half inches long.

If you want to go on a birdwatching trip, you’ll find plenty of other species to be excited about too. The Cuban Amazon parrot and the Cuban parakeet are parrot species native to Cuba, and you’ll find pygmy owls and the colorful Tody, too!

Even if you’re not a keen birdwatcher, you owe it to yourself to check out the colorful flocks of flamingos that call Cuba home! This is the place to see flamingos in the western hemisphere.

8. Cuba Used to Have Two Currencies

Cuba was, until very recently, one of the few places that you could use two different currencies. These were the Cuban Peso, the standard national currency, and the Cuban Convertible Peso, which was used by tourists. The Convertible Peso was phased out earlier this year, which makes buying souvenirs far less confusing!

Back in the day, it was actually illegal for tourists to use the Cuban Peso. However, this rule was phased out too, which meant that for a while, tourists could choose to use either currency. They were worth different amounts too, with the Convertible Peso worth around 25 Cuban Pesos.

US dollars are also commonly accepted in many stores, so you may want to hang on to a few dollars while you’re on vacation.

9. Cuba Has an Impressive Literacy Rate and Life Expectancy

Despite being a fairly poor country by global standards, Cuba has an impressive welfare state that, according to statistics at least, does a solid job of taking care of its citizens. The Cuban literacy rate is a massive 99.7 percent, far more than just 65 years ago.

Cuban healthcare is also very well-regarded around the world, with an average life expectancy nearly identical to that of the US.

10. Cuba Is the Home of Many Popular Cocktails

Cuba’s rum-rich culture has led to the creation of many internationally popular cocktails that you might never have known are Cuban! For instance, the humble rum and coke, also known as the Cuba Libre, originated back in the Spanish-American war, when Coca-Cola was first imported to Cuba.

The Mojito is also a Cuban recipe, so the next time you enjoy the minty, refreshing taste of one, remember where it came from! The Daquiri, another of the world’s most popular cocktails, also originates in Cuba, where legend has it, an American engineer called Jennings Cox created the cocktail.

While Cuba may be open to US tourists, it’s still got a very authoritarian government, which means that access to the internet is very heavily regulated. If you want to get online, you’ll need to head to some designated hotspots, and you’ll need to pay for it, too.

Access to some websites is still restricted too, so you may want to subscribe to a VPN before you head to Cuba if you want unrestricted internet access.

We Hope You’ve Enjoyed These Facts About Cuba

These facts about Cuba should shed some light on this oft-misunderstood country. It truly is an incredible destination, and it’s easier to visit than ever. If you’re hoping to take a trip, then check out our travel guide on Cuba to learn even more.

You should also take advantage of our travel tips to make the most of your vacation! And read about all of these 36 Fantastic Things to do in Havana, Cuba

If you enjoyed all these facts about Cuba, make sure to save it to Pinterest for your dream boards.

French Food: 24 Traditional Dishes To Try in France or At Home

23 Amazing Things to do in Mexico’s Yucatan Peninsula

The Best Things to do in Alberta, Canada

France is known for producing some of the greatest food that...

23 Amazing Things to do in Mexico’s Yucatan Peninsula

Mexico’s Yucatan Peninsula is an expansive swath of land in the...

Team Out of Town Blog Hub (Outoftownblog.com) –  Are you one of those people...

The Best Things to do in Alberta, Canada

Whether you visit Alberta in winter or summer its beauty shines...

The use of traveling is to regulate imagination with reality, and instead of thinking of how things may be, see them as they are

Make this choice and from now on, you will forever be a part of every adventure!